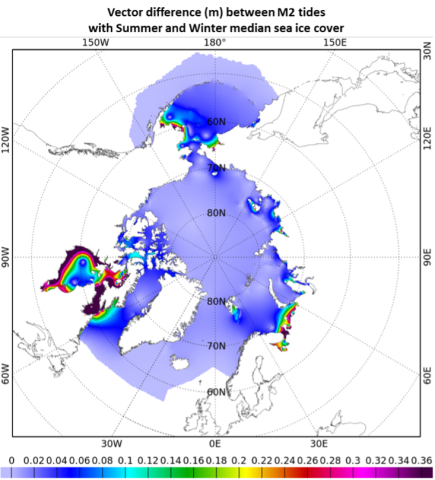 The Arktalas Hoavva project, funded by the European Space Agency, addresses four major scientific challenges for the Arctic, notably the Arctic Amplification and its impact, the impact of more persistent and larger area of open water on sea ice dynamic, the impact of extreme event storms in sea-ice formation and the impact of the Arctic ocean spin-up. Related to these challenges the specific study on “Impact of sea ice friction on ocean tides in the Arctic Ocean: Modelling insights at various time and space scales” investigated the linkages between sea ice change and ocean tides in the Arctic Ocean. In so doing, it linked hydrodynamic model simulations together with CryoSat-2 satellite altimetry observations and in situ tide gauge measurements.

Although ocean tides are one of the major contributors to the energy dissipation in the Arctic Ocean, they remain relatively poorly known. In particular, their interactions with the sea-ice, grounded-ice and fast-ice cover are often simply ignored in tidal models or considered through relatively simple combinations with the bottom friction.

In order to obtain more realistic simulations of the tides in the Arctic Ocean at seasonal to decadal time scales several approaches have been explored to improve the prescription of the friction under sea ice in the hydrodynamic model. Validation of the tidal model simulations in the Arctic Ocean is challenging as very few long time series of high-frequency (time stepping of less than 1 hour) tide gauge observations are available. As such colocations for comparisons with the model simulations were limited to less than ten points. On the other hand, the CryoSat-2 mission brings an invaluable picture of tidal estimates representative of the most recent period (2010-2020), with almost complete coverage of the region, including sea surface height estimates in the leads.

Results show that the seasonal variations of the tides due to the presence of sea ice reach several tens of centimetres in some regions of the Arctic Ocean (Figure 1). Over the long term (40 years), we also observed that the variability of the main tidal components (M2 and K1) locally reaches a few centimetres not only in the Arctic Ocean but also in areas at long distances, such as the English Channel, clearly demonstrating the strong connection with the Arctic in terms of ocean tide dynamics.