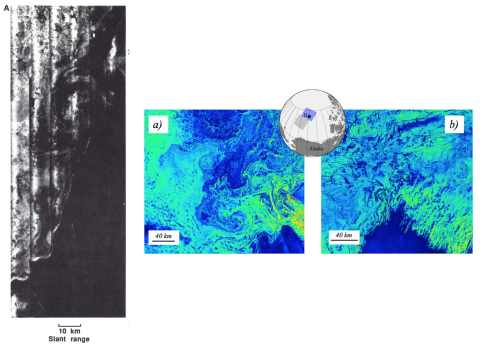 Arktalas Hoavva, funded by the European Space Agency, addresses four major scientific challenges for the Arctic. The study Observational evidences of eddy-sea ice interactions in the pack-ice and in the marginal ice zone published in Geophysical Research Letter, addresses the challenges related to characterize the impact of more persistent and larger area of open water on sea ice dynamics, by combined use of high resolution field and satellite sea ice observations. The method capitalizes on early visual observations of ice eddies in airborne Synthetic Aperture Radar (SAR) from the 1980ties and demonstrated the detailed processing required for automatic eddy detections algorithm in ice covered waters.

Mesoscale eddies are routinely observed by satellites in the world oceans. Yet, in the ice-covered Arctic Basin, the presence of sea ice makes it challenging to characterize the eddy field. The study lead by Angelina Cassiandes, present a detection method of surface ocean eddies based on their signature in the displacement of sea ice, using high spatial resolution satellite images. A dipole composed of a cyclonic and an anticyclonic eddy is identified over a week in mid-October 2017 with a horizontal scale of 80–100 km. Its presence is confirmed by direct in-water measurements of strong orbital motion in the surface layer during the same period. This work demonstrates that detailed processing is required for identifying the signature of eddies in sea ice covered waters, which is not always obvious at first sight.

Aerial surveys or high-resolution satellite observations of the Arctic MIZ have frequently reveals swirling movements of sea ice that are the signature of mesoscale ocean eddies. This was illustrated with the L-band airborne SAR image from the Fram Strait in July 1984 (Source: Johannessen et al., 1987) at a high resolution of 3 meters. Other examples of such satellite SAR observations mesoscale eddies in the marginal ice zone are here shown for the Canadian Basin in October 2017 and 2018, respectively (Figure 1). Many studies of eddies in sea ice are detected primarily based on visual interpretation of the images (e.g. Kozlov et al, 2019), which increases the risk of not detecting all eddies present.

By combining upper ocean currents under the sea ice from the Beaufort Gyre Exploration Project, the signature of ocean surface eddies in sea ice vorticity have been detected based on the analysis of high-resolution images from synthetic-aperture radar (SAR).

Through processing of pairs SAR images for the locations of eddies identified in the current measurements have been done. The sea ice drift is estimated combining feature tracking and pattern matching techniquesand projecting the images on a regular orthogonal grid. Combining two or more images the sea ice vorticity can be calculated over several time periods of observations, to evaluate the persistence of the signal. This is exemplified with the vorticity pattern obtained from any single pair of SAR images, although the intensity tends to be more pronounced when averaging over a week (compare panels b and c of Figure 4). On average, two strong anomalies are visible close to the mooring data used: a cyclonic signal West of the mooring and an anticyclonic one East of it, both with a horizontal scale of 80–100 km. Considering that our ocean dipole would be advected by the background flow with velocity of ∼0.05 m/s , it would have roughly travel northward by only 30 km over the week considered, consistent with the persistence of the sea ice vorticity pattern.

The combination of the sea ice vorticity anomaly and the presence of eddies captured by the mooring, the lack of a significant wind forcing over that period, and the scaling arguments presented before, allows to attribute the signal to the signature of the ocean mesoscale eddies. The presence of two vorticity anomalies with opposite signs indicates that the signal is indeed a dipole, composed of a cyclone and an anticyclone. 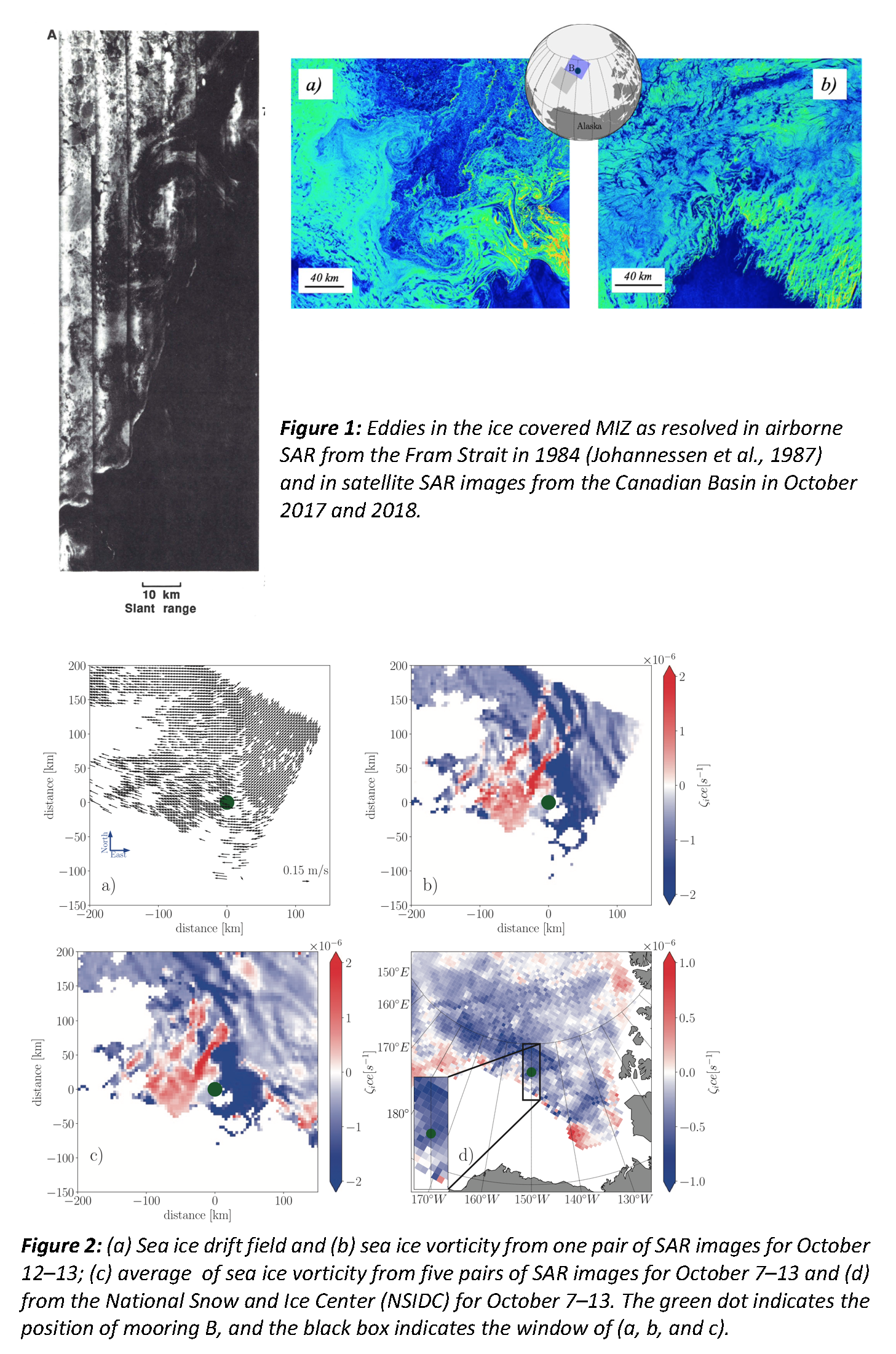 The Arktalas Hoavva publication: Observational evidences of eddy-sea ice interactions in the pack-ice and in the MIZ (Relevance to ASC-2). Published in Geophysical Research Letter in 2020 by A. Cassianides, Camille Lique, Anton Korosov.https://doi.org/10.1029/2020GL092066